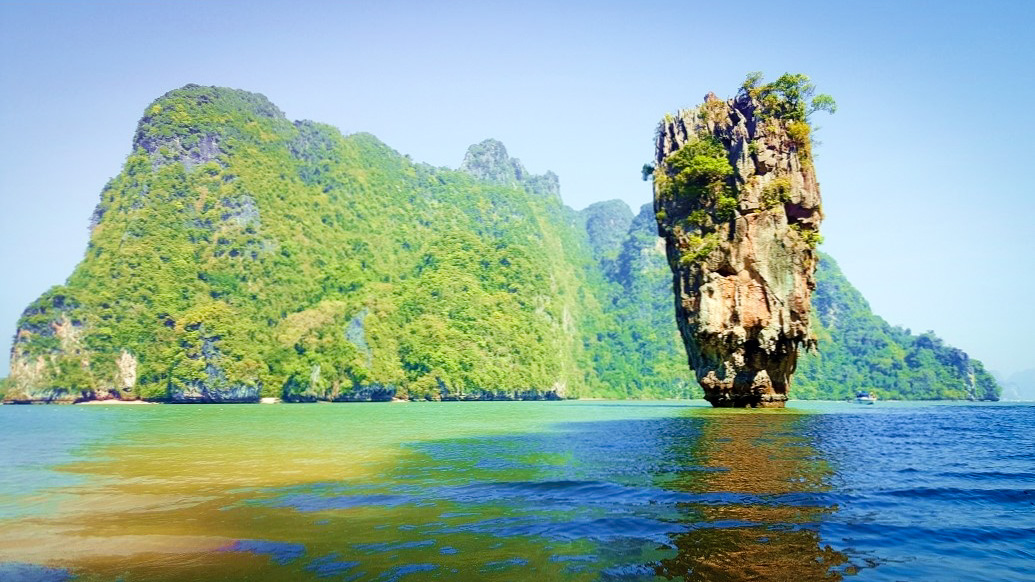 Is not for the first time I start writing about Thailand, but every time I was nearly ready with my article, something was missing. Most probably because I find Thailand so beautiful and amazing that no matter how much I write about this country, there are still a lot of other unbelievable things which need to be written.

Yes, I have no doubts, for me this country is exciting, interesting, special and full of great experiences! Amazing landscapes, friendly people, sex tourism, high tolerance in many aspects of everyday life, religion, interesting contrasts, millions of islands in the crystal clear  sea, really deep love and respect for the king and his family, prostitution, “fugitives” (people who committed different crimes in their country and left before the authorities could catch them. With some cash they can have fake identities and disappear on the millions of islands, living without too much worries to be discovered, except if after certainly time start posting pictures on the social media), are only a few words so typical for this country. As you can see, could write even books about Thailand and probably would still miss to mention a few things.

From all the countries I have visited is no other which I would recommend that much to visit if you have just even one chance! Have spent months, mostly in the southern part of the country and on several islands and I left the country willing to be back anytime, even if I would need to use a raft over the ocean to get there. I’m not saying that this country is perfect because it has its problems and dangers as well, just like all of the other countries. But believe me, if you don’t start doing “too illegal” things a trip in Thailand can be the journey of your life.

Religion is really respected in the country

Let’s mention the most important things you need to pay attention to, no matter where would you be in this country. Religion and the royal family. These are really important and highly respected and no act of disrespect will be tolerated! How serious for Thai people these things are, for example last year a tourist from UK was arrested because had a Buddha tattoo on his leg. Because the leg is the lower part of the body, spiritually too, the tattoo was on the worst visible part of the body. If you have any Buddha tattoo on your body, the best is if you are not showing it. Does not mean that once you have such a tattoo you will have automatically problems, but spotted by someone with radical mentality can be a source of problems.

Statues, buildings, monks, paintings, many are related to the religion

Several local have tattooed on their shoulder long live the king. According to their belief already this few words on their body are protecting them from, but many times as I was discussing with locals about the king, women’s started crying due to the strong emotions they had. They do not respect in the same way all the politicians, the Thai people are not blind, they see very well what is happening in their country, they also know about different corruption case of the politicians, but the royal family is a really strong exception. Anyway, the family is not member of the parliament; this job is done by the prime minister and the political parties. But the king is who is choosing someone from the party with the most of the votes for the position of prime minister. While shopping and coin is falling down, rolling on the floor, do not step in it to stop it! The kings face is on the coins, can be touched only by hand.

Some of the food you can find on the streets

What you should never ever try to take in or out of the country, no matter how small quantities, not even the smallest particle, are all kind of drugs (not talking about medicine). If the police will discover you tried to smuggle any kind of illegal substances you might face the death penalty or in sentence for life.  No, this is not a joke!

Every hotel has its own “pets”

Hope I did not scared you that much and now we can talk about more pleasurable things. No matter in which period of the year you arrive to Thailand, once you are out from the airport building you feel the high temperatures and humidity of the air. These conditions are benefic for the plants and the country still has a few rainforest. There are several islands in the Andaman Sea, some of them with their own mangrove forest; some are connected by shallow lagoons. The high and low tide of the sea formed several caves and tunnels in the rocks which you can visit either by small canopy or simply walking through. The landscapes, the flora and fauna of this country are just amazing.

With canopy under the rocks

The language specialists should discover new synonyms for beautiful and amazing to can describe how really the nature in Thailand is! Beautiful beaches with white sand, waterfalls, rainforests, natural parks, if you love the outdoor you will find for sure all you need here. Sometimes you might be surprised finding elephants between the houses, but visiting one of the sanctuaries for these animals can be the best way to be close to and to learn a lot of new information’s about them.

No, do not get in that seat!

If only one person will listen to me, already made sense to write this sentence, please DO NOT RIDE THE ELEPHANTS!!! Might sound strange because they are really huge animals, but the backbone is not the strongest part of their body. Yes, I know, I saw the movies, even in reality too moving huge trees by that’s not done on their back! Most of the people, even the kids know that elephant don’t forget. Unfortunately this is how they are trained to transport people on their back. Starting from a young age the elephants are tortured and beaten daily till they give up their own habits and become actually slaves of their owners. Do not forget that these animals are not pets, they are wild animals. Because they never forget, later when carrying tourists on their back are doing just because are afraid to not be tortured again as they did not forgot what happened earlier to them. There are plenty of possibilities to feed them, wash them, play with them, believe me, they will make you and the animals too happy and really no need to ride them!

One of my unforgettable animal experiences from Thailand is when swimming around one of the many islands in really shallow, around 1m deep water young black tip sharks were swimming around me. This is really the no comment category, I was just speechless.

For those who like more cities than outdoors Bangkok is a perfect destination. Should be too big, too crowded, just choose any of the smaller cities and you will find the same as in the capital just somewhat lower scale.  Around Bangkok you can find the famous floating markets like Bang Nam Pheung or Khlong Lat Mayom, where you can find all the possible fruits and vegetables from this country which you can have even prepared right on the boats as a fresh meal. Actually to eat and to make shopping are the easiest things in Thailand as in every city, even is villages you can find several shops, restaurants, markets.

While walking through any city and you want to eat something without sitting in a restaurant you can choose from the several mobile kitchens build on motorcycles. As in most of the countries in Asia you find a lot of scooters and motorcycles driving like crazy in all the possible directions. If you decide to rent a car and drive here, please do it really carefully and double check your mirrors before changing directions, as most of the riders have no helmets or any protectors and no knowledge of the traffic rules.

Some used to ride motorcycles and scooters

What you will find in all of the cities, even in the small ones are a lot of small massage saloons. In some of these saloons the staff will massage your muscles and in some of them you can get a happy finish too. Please be aware to clarify before starting anything what do you want and what do they offer! This is something traditionally made by “females”. Why I wrote “females” is because in Thailand are several ladyboys. Is not something new, has its own tradition, some of them are really famous. Some of these people were really born in the wrong body and they just feel like females, some start taking hormones to become ladyboys. Many of them have really huge, although fake boobs and make face plastic surgery too. The question of the genitals is the last decision and many of them may live their whole life as females with male organs.

How many female do you see on the picture?

In the places where tourists used to be are a lot of prostitutes as well and many of them are ladyboys. Unfortunately many tourists don’t really make any difference between Thai women, thinking that all of them are either ladyboys or prostitutes. Please, don’t be like this! Do not forget that in Thai culture the mutual respect, being friendly and smiling to each other has an old but very alive tradition. Only by raising your voice while you are talking to someone is disrespect. Regardless of the job they have or their gender, are humans just like you and deserve to be respected. Many used to forget this, but try to be the exception! If you want to play the typical “game” by going into bars and knowing there different local girls, can be really funny and interesting, yet, don’t be surprised if under her skirt you may find things which you were not thinking at all, especially if you concentrate only on her boobs which seems want to break free from her t-shirt. This game is like this and if you want to play it, either clarifies from the beginning the role of each person taking part in, or be really open for everything. J

As I wrote at the beginning, there are so much more to be written about Thailand. All wanted to do with these few sentences is to show you how incredible and really interesting country is. All those who were not decided if to visit or not, hope could help you to answer the question. If you ask me, anytime, no matter how but I’m always ready to go back there.

On the picture is hiding an elephant